Come to a lake in Lincoln that doesn’t even show up on google maps they said, in November they said, it will be freezing cold & blow a gale they said, it’ll rain, you’ll get muddy and parts of your body will go numb they said. Well they weren’t wrong but I’m still happy I went to the inaugural DF95 Nationals at Lincoln Model Yacht Club.

The fleet gathered on Friday afternoon at Scotland Farm for a final shakedown and the customary chat about your journey, the upcoming weekend and an in depth analysis about the one thing we can’t control… ‘the wind’

Turns out we shouldn’t have bothered as Friday afternoons gentle zephyrs were nothing like the solid wall of wind we would face on Saturday and Sunday! With the sun falling from the sky about 4pm everyone dispersed to sort out their digs and being sailors we soon re-grouped at the pub and by 6pm were on the ales. Now you know you’re in a proper pub when they’re advertising a ‘Meat Raffle’ behind the bar and we weren’t disappointed.

We soon took advantage of a decent meal in the restaurant, took full advantage of the wine list and re-filled our bellies for the weekend to come. It wasn’t all plain sailing however… like the famous scene in Withnail and I, Derek Priestley requested the finest Cheese and biscuits known to humanity and was bitterly disappointed when presented with a bowl of grated cheese for his cheek!

And then the strange gathering in the bar, an all male karaoke disco of some kind, a man playing a keyboard that didn’t appear to be plugged in, a laptop and a lot of steroids. Suddenly the ‘meat raffle’ took on a new more worrying aspect and I wondered if the top prize was sausage based or whether it was just the gin making me think these terrible thoughts?! Regardless I didn’t stick around for the prize giving!

34 boats made it to the start line on Saturday morning which made for 2 decent sized fleets, with 6 up, 6 down giving everyone a chance to get plenty of racing done over the course of the weekend and taste life at the top and the bottom. Principal Race Officer Darin Ballington set the tone for the weekend, clearly explaining the format and reminding us to enjoy ourselves and respect each other on the water and on the bank. An ethos which held throughout the 2 days. 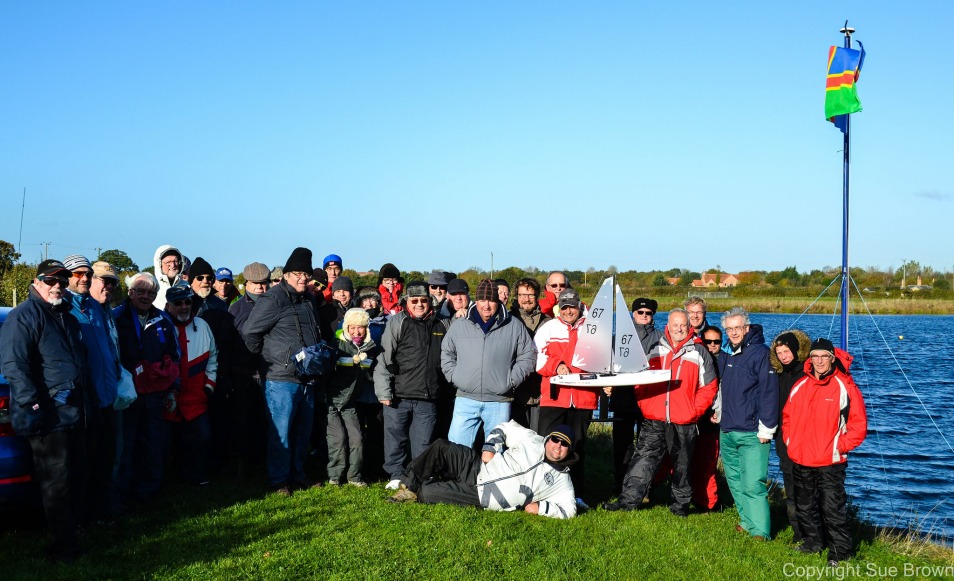 The seeding races kicked off at 10am, the majority of the fleet were in B rigs and revealing in the fast open water conditions. The wind built steadily throughout the day and it soon became obvious there is big overlap between the DF95 rigs. B & C rigs were racing neck a neck at times, with the C rigs gaining in the bullets and the B rigs sliding away in the lulls. By the end of the day the entire fleet had made the change down to C rigs with the wind gusting 25kts+ and considering these wild conditions the boats survived remarkably well, no major damage to report, no blown winches and just one rudder servo that gave up the waggle on Tim Longs boat. 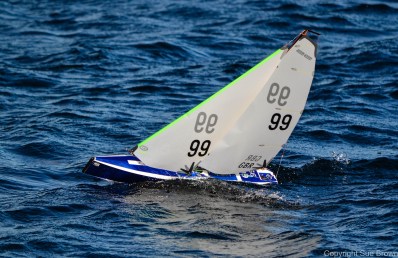 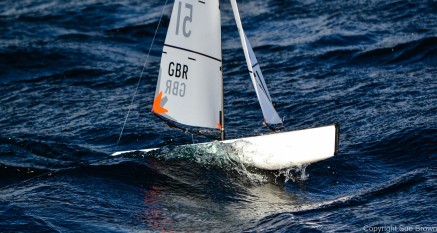 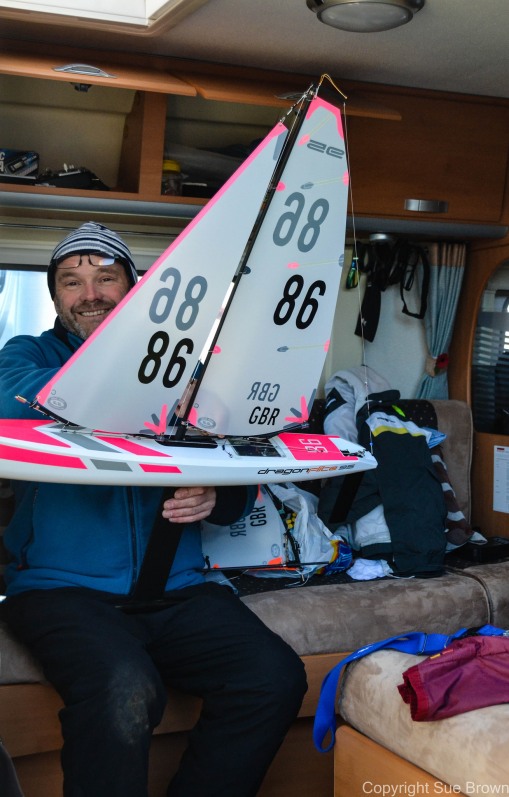 In terms of the racing it was tight at the top, with the 3 senior amigo’s Derek Priestley, John Tushingham and Ken Binks leading the way. For us middle packers it was hard work sailing consistently enough to stick in A fleet with everyone dropping down at some point and counting some big scores.

We again gathered at the Railway Inn for the evening meal and it was great to see all of the competitors out enjoying themselves. By the last count there was over 40 of us in attendance, completely swamping the restaurant with the overspill eating in the bar. And what an outstanding meal it was, Steak Pie or Curry with crumble and custard for afters, outstanding value for £10 all in. The wine flowed, the speeches followed and this time Derek got his cheese and crackers and all was well with the world.

The day dawned cold, with frost on the windows and more of that bitter wind from the North. The racing continued from 10am with Darin driving the fleets hard from the outset to push through as many races as possible. Conditions were a little grimmer today, driving rain & strong winds saw a few taking an early bath and I can’t say I blame them. 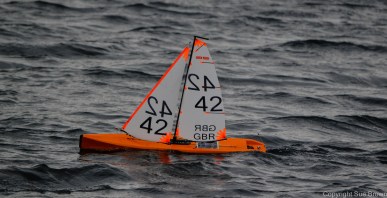 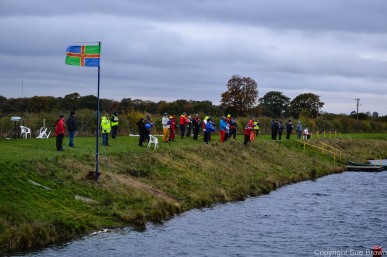 Again there was much chopping and changing of rigs, we started the day in C rigs and slowly worked our way up to the A’s. There was a big shift in the breeze late in the afternoon which necessitated a course change and the shifty fading breeze that followed really separated the men from the boys in the last 4 races. Many of us suffering a couple of brain bubbles before the racing finished at 3:45 with a return of the sun helping to dry out our weary bones and gear before the journey home.

Throughout the weekend the one design nature of the DF95 really shone through. The key to doing well was knowing when to change rigs, setting up and tuning the rig you chose (often with seconds to spare!), tactics on the course, spotting the wind shifts and keeping yourself out of trouble. All these skills need to be perfected to win and every place on the scoreboard was hard fought and well earned it’s just that John Tushingham, Derek Priestley and Ken Binks are a little bit better than the rest of us. For now at least they are the top 3 but there is a big fleet building behind them ready to take away their crown. See you next year boys, we’re coming for you! 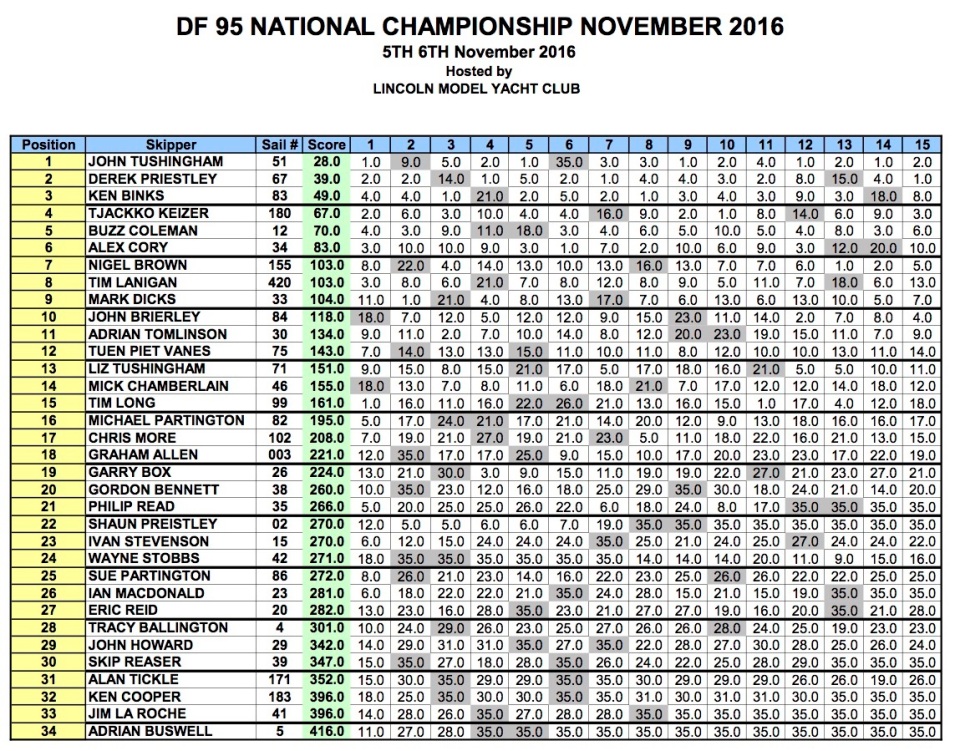 Once the top 3 were dispatched with their prizes the now traditional off beat prize giving/raffle commenced. Lincoln MYC eager to out do the winning tickets being drawn out of the mystical teapot at Fleetwood utilised the magical mayonnaise tub of wondrous prizes. Bottles of wine, unmarked black boxes of mystery and boat socks were distributed throughout the fleet in a somewhat haphazard manner… Mick Chamberlain making up the rules as he went along, kissing the girls and shaking hands with the blokes. We know your game 😉 Finally Eric Reid scored the top prize of a brand new transmitter/receiver which was kindly donated by Mike Weston of RC Yachts.

Thanks to Darin for being the race officer and giving up other sailing commitments to run our event on the bank. Thanks to to all the observers, line judges and Fiona for the scoring. And to our most travelled competitors, the Dutch crew of Tjakko Keizer & Tuen Peit Vanes… Thanks for coming chaps, see you again soon.

This post will be updated when more of Sue Browns images become available and anyone else who took photographs, please email me your best shots and I’ll add them to the report.