If you didn’t make it at the weekend well you missed out that’s for sure. DF65 and DF95 fleets in the mid and late 20’s drifty light Saturday morning gave way to some great breeze later on.

Sunday saw a similar start but the wind ended up being spot on for the afternoon session with the skies nearly as blue as The lake! 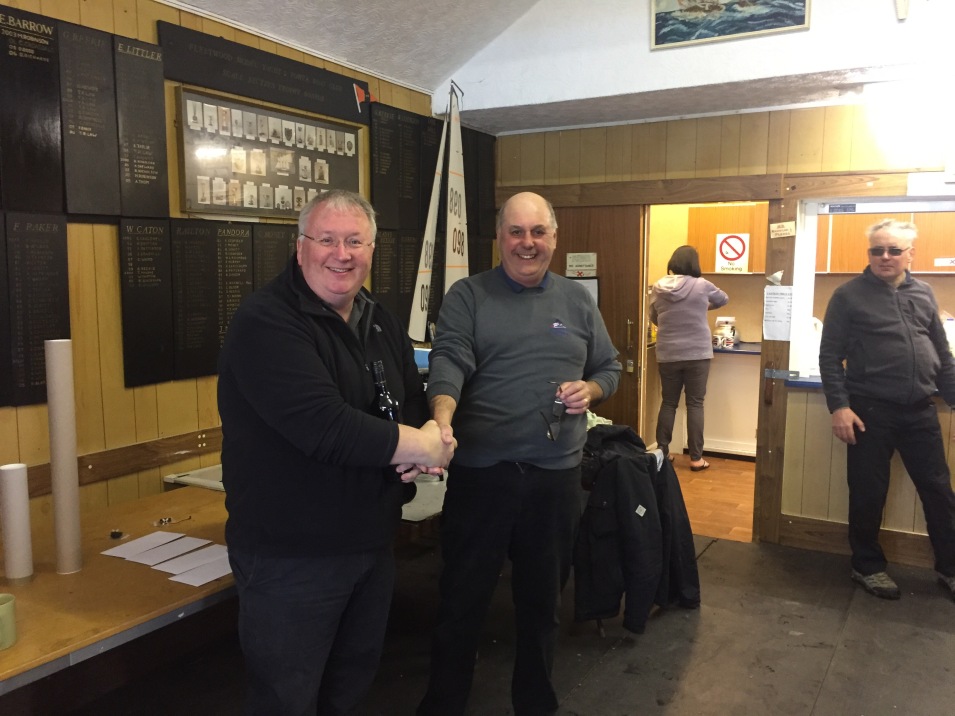 The usual suspects took home the chocolates and wine, for a full report and some fun facts check out the Fleetwood website by clicking here 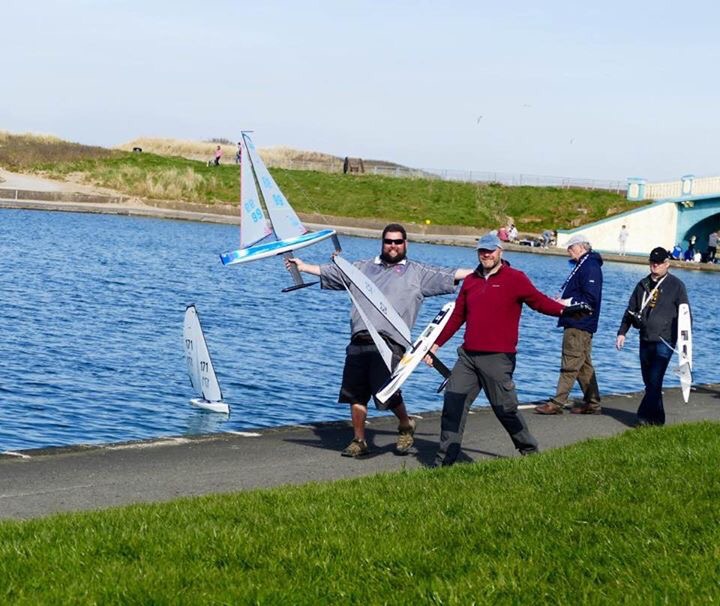 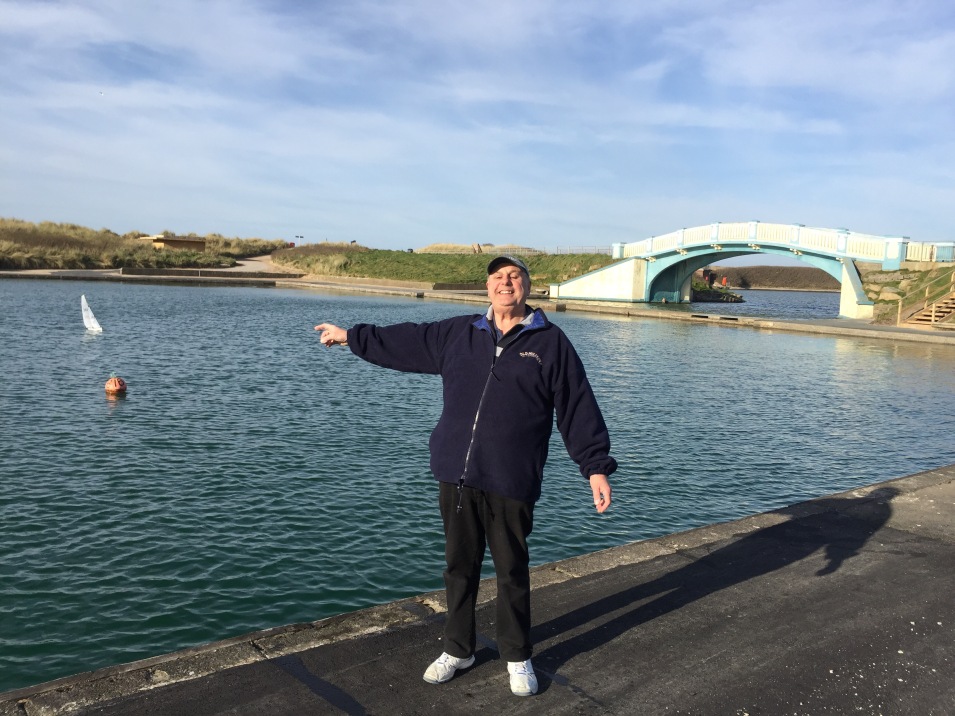 Uncle Derek says come and look at our lovely water, blue as you like, wind up and down the lake. If the car isn’t already packed…we’ll you need to get on it!

Entries are open until the starting gun goes, crack on!

Just a brief note before I set out on my Fleetwood bound journey to let you know that the entry of the DF65 Nationals at Eastbourne is now open and you can place your entry for the event.

Check out the link by clicking here.

More detail when I return.

So in 7 days time there will be lots of excited people ready for the off on the trip ‘oop North’ to one of the best and most historic sailing waters that the UK has to offer.

The DF Racing UK TT circus will roll onto the car park at Laidleys Walk on Saturday 25th for a day of DF65 racing followed by a good debrief at The Mount before another Sunday of DF95 racing on the 26th March. 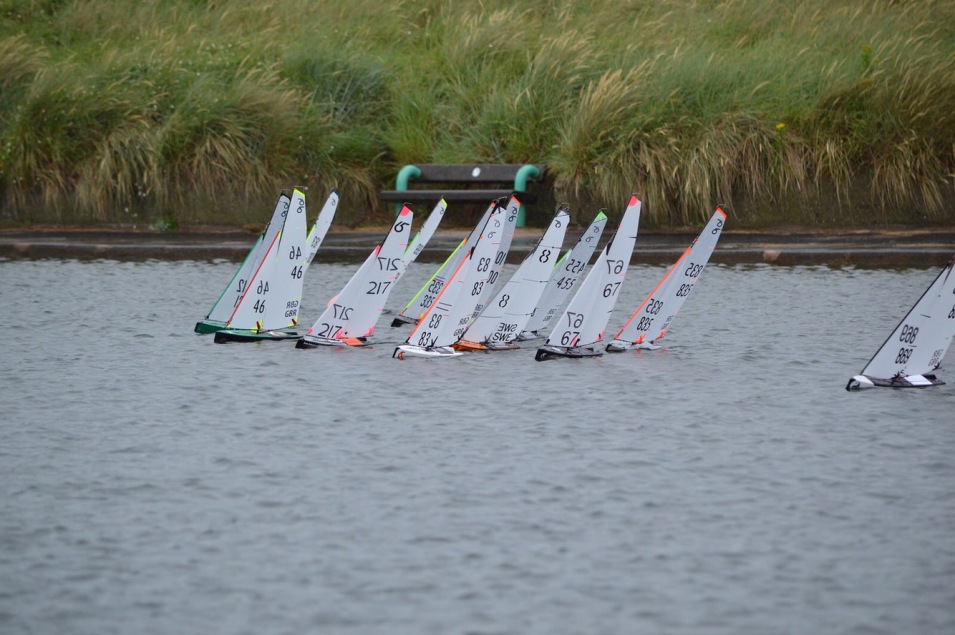 So far it’s looking like 20 plus for each day, there’s plenty of room for more skippers to get involved so please get your entry in.

The DF Racing UK crew rolled into Chipstead SC in Kent on Saturday for the first of the weekends TT events, a super light day which saw Ken Binks taking the win, there’s a report further down the page.

The story of Saturdays light and fickle breeze looked like it would repeat itself at Coalhouse Fort on Sunday and the first few races took an age however after an early lunch there was an element of pressure to the light stuff and in the end we got 12 races in which didn’t seem possible when we turned up!

For a full report and results check out John Newtons report by clicking here.

It was quite light at Coalhouse too! Photo – Sue Brown

As ever Sue Brown was on hand to take photos of the racing, not a huge amount of action for her to capture but plenty of photos all the same. Click here to take a look.

So 21 of us converged on Chipstead SC this morning to enjoy a great days sailing, after a somewhat gloomy start the sun came out and the lake looked great, however despite much whistling, coaxing and all sorts of other weird dances it seems that someone forgot to put 50p in the wind meter last night and there was none.

Despite this all 21 of us lined up at the start of the first race and off we went, Tim Long being the luckiest of the bunch and he took the first bullet of the day followed by Ken Binks and a very excited, and rightly proud, Glen Meekcoms. Ken then went on to take the bullet in race 2 before having a servo failure and using both his discards in races 3 and 4.

Race three saw John Tush take the top spot for his only first place finish of the event, surely he hadn’t been defeated by Mike & Ann Weston’s hospitality the previous night….had he? JT was pushed hard in the race by Buzz Coleman who was never off of the pace all day and he took the top spot in races 4 and 5. 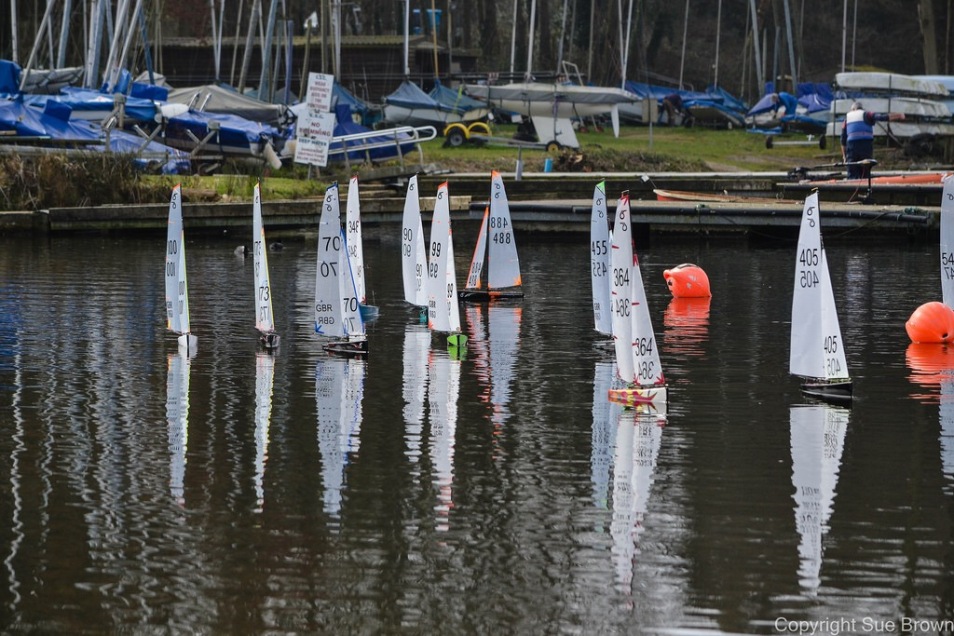 Close racing despite the lack of (any) breeze. Photo – Sue Brown

With the breeze failing to show up still the races were sometimes pot luck and you could easily find yourself running to the windward mark before running to the gate and running back to the top mark again. The biggest victim of this “rogue” Zephyr of a breeze was Derek Priestley who didn’t score a bullet all day despite leading races often up to the last leg. His self educated lesson has been “It’s never where you think it is this bl#*%y wind”, indeed Derek it never was, however he was consistent in his placings. 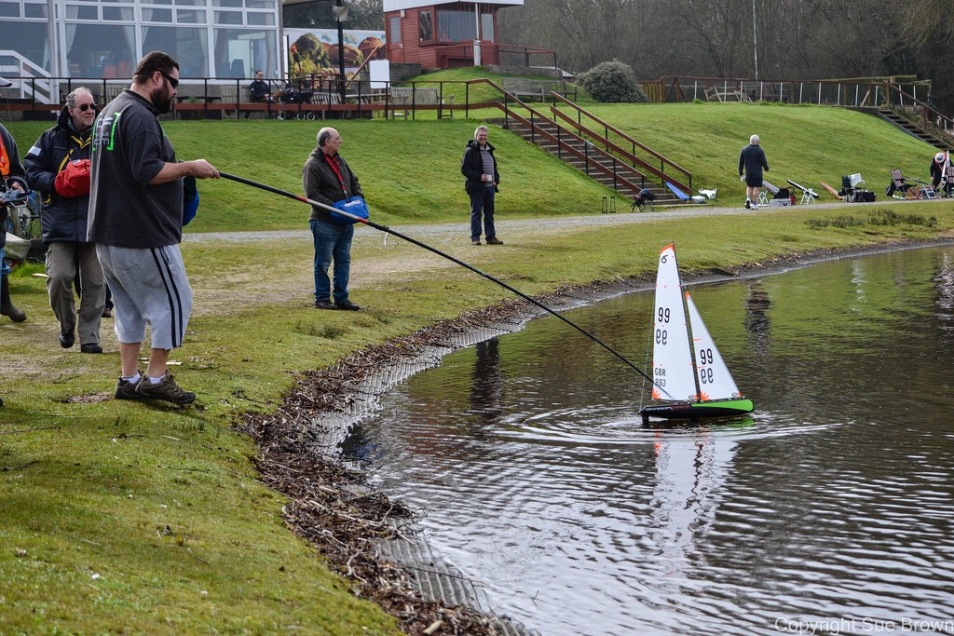 With a large fleet of boats often approaching marks as a large group it did make some of the later races quite interesting and the battles down the fleet were like watching match racing in super slo mo. Frustration eventually set in and after ten races it was decided to call it a day. 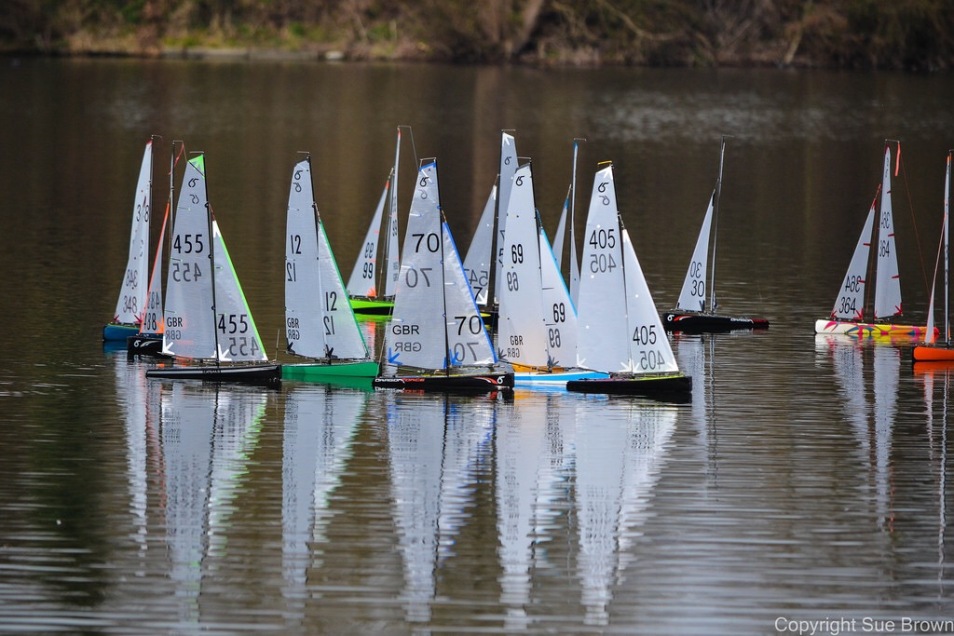 Top of the pile was the very on form Ken Binks with a haul of 21 points from the ten races with 2 discards, Buzz, Derek and John took the next three spots and the top four were separated by a mere 6 points which is some good consistent sailing from them. Tim Long rounded out the top five but he was never a threat having spent most of the day wrestling with a pre inflated lifejacket!

Everyone had fun, Chipstead laid on a great event despite the un co-operative breeze. We are all off to Coalhouse Fort tomorrow for some more organised drifting with the DF95. Results sheet below for those that need to see it. I’m sure Sue Brown will have some photos early next week.

To the bar Batman!! 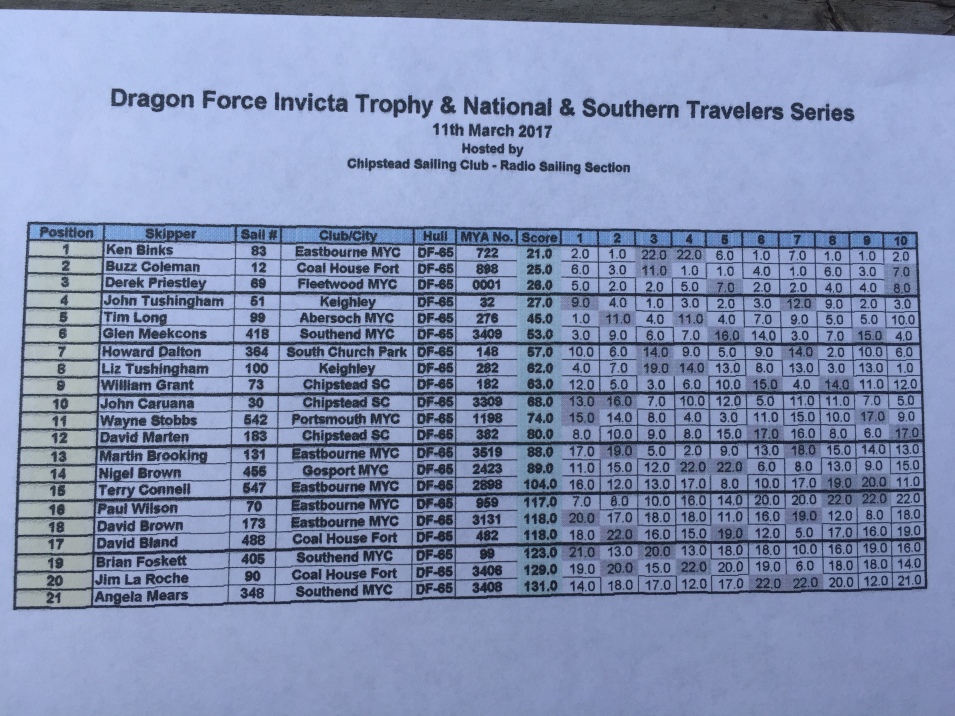 So the DF65 V6 was given it’s UK debut at the RYA Dinghy Show over the last weekend and there was a huge amount of interest in the V6. Many questions were asked, many answers were given and all those who helped out on the stand went away feeling that they had done a great job of making people more aware of the DF Racing Classes.

So the V6 is now available from all good retailers some of whom will be offering the new A+ rig kits and sails for the DF65 class. The A+ rig will be allowable as a legal rig for the TT Series from 20th May 2017 which is the Gosport round. For club racing, please crack on! 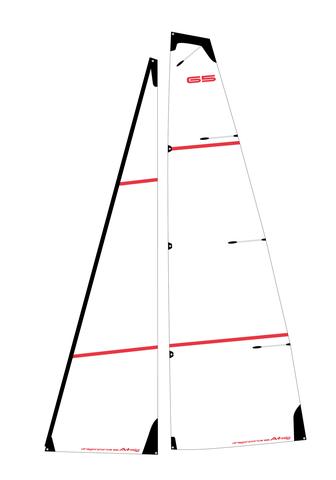 With the new rig comes an updated set of rules to cover both the A+ rig and some backward compatible parts to update earlier boats.

So we have a new set of restricted class rules, a new A+ rig template, a new DF65 class logo and we have also added the V6 rigging instructions to the site too.

The relevant information can be found by hovering over the DF65 script on the menu above then selecting from the drop down menu. 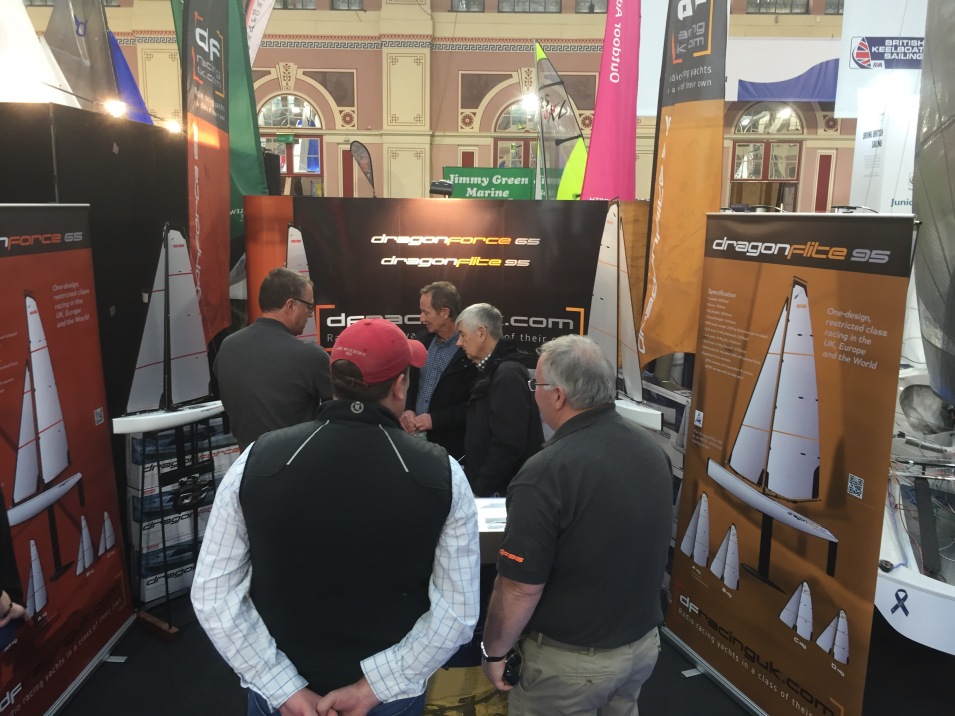 So we are into day 2 of the Dinghy Show here at Ally Pally and what a time we are having. The stand has been super busy with lots of people interested in getting involved in radio sailing with the DF Racing classes.

We’ve also been surprised by the number of people who already race one or other of the classes and are coming to say hi! 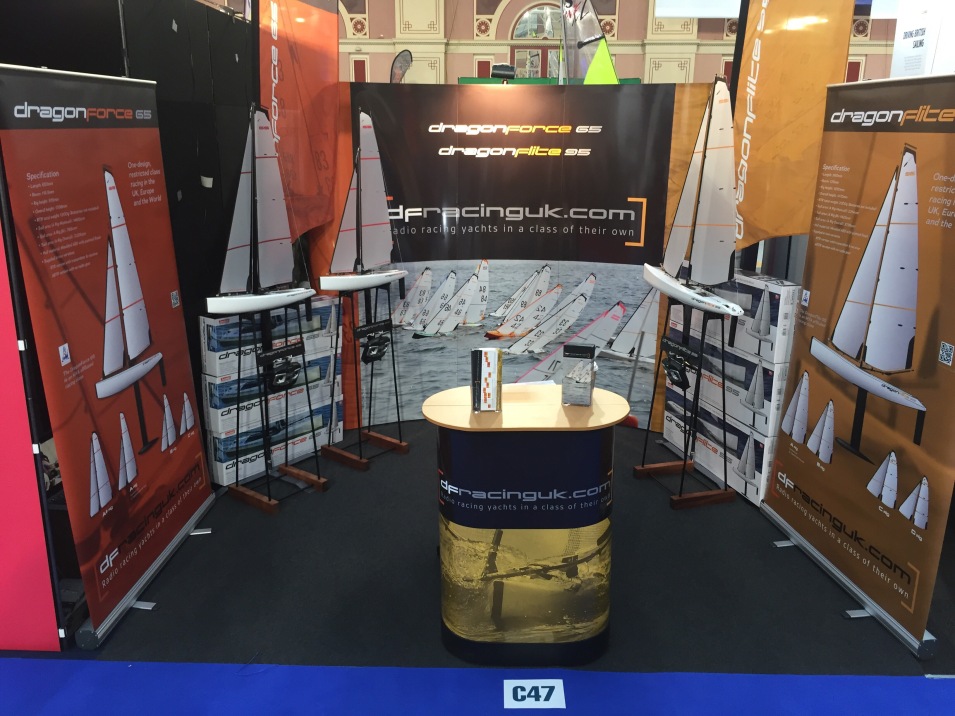 So the DF Racing UK crew are ready to rock and roll at the  2017 RYA Dinghy show. We are on stand C47 in the great hall, pop along and say hi if you’re at the show. Opening at 10am we’ll have a knowledgeable bunch of chaps and chappesses to answer your DF Racing questions. 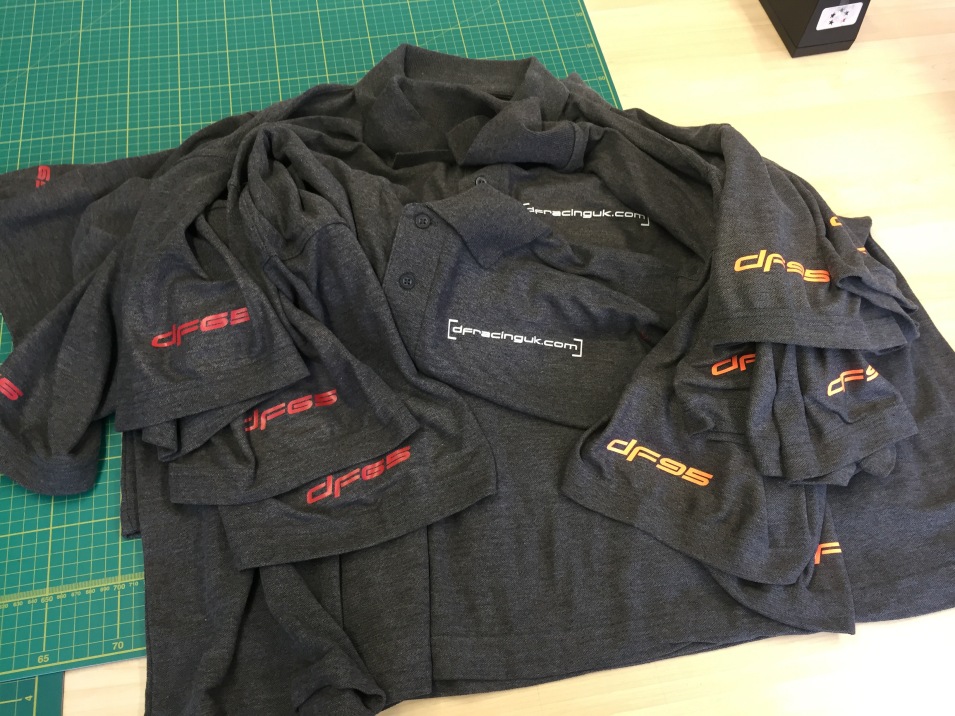 So we’ve got a stand plus some helpers plus some snazzy T shirts, I think we are ready to go.

DF Racing will be available on stand C47 in the great hall on Saturday and Sunday, setup happens tomorrow along with some drinking, the stand looks awesome and we can’t wait to show it to you guys.