We have some more events news posted up on the events page including details of the 2016 Nationals at Fleetwood.  The venue is legendary and can provide some world class conditions. The social is also pretty legendary too with Uncle Derek’s après dinner quiz sure to provide much entertainment. Well worth the trip North for you Southern types! Check out the events page here

There are also details of an event at Fleetwood during May which will be of interest to those not attending Dragonfest.

With no other club activities planned for Easter Good Friday, Ripon Sailing Club’s Dragonforce 65 owners decided that it would be an ideal opportunity to organise some racing for this popular class of radio controlled model yachts. Plans were made, DF65 owners from other local clubs were invited and the weather forecast was kept under close observation.
What an inspired choice of date it turned out to be, with sunshine and a mainly 12 to 14mph breeze all day long. Not typical Bank Holiday weather at all. Six RSC helms were joined by 15 visitors from other Clubs and a full programme of 12 races was held. Sailing conditions by the Clubhouse, where the course was laid, were not always straightforward. Regular shifts and a few squalls and holes in the wind provided variety along with some quite unpredictable headers that regularly confused those trying to judge the layline into the windward mark.
No fewer than six different helms won at least one race each and though the eventual top three overall had the more consistent string of results, all of them had a number of races that did not go entirely to plan. An oscillating wind meant that the port end of the start line was favoured, but it did get very crowded at times! Much depended on keeping out of trouble at the start and sticking to the left side of the beat in the expectation of getting a port tack lift to the mark. Some learned this lesson sooner than others while some never did learn it, and it showed in the results.
The course was re-laid during the afternoon to take account of a changing wind direction, resulting in the need to re-assess the best way around. Again some latched on to this more quickly than others, proving that there’s no substitute for experience and that time on the water holds just as much value for model yachters and it does for those who sail bigger boats.
The event came to a close with prizes for the top five and spot prizes for others throughout the fleet.

So today was Friday and I had some good sailing, but that’s not what this post is about!

We have been contacted by the keen guys and gals at Ripon SC who are holding an informal get together and race meeting next Friday which is Good Friday, 25th March.

From their man on the ball Ian –

The Galley will be open or bring a picnic lunch

Come along and enjoy some informal but competitive DF65 racing

This page shows how to find us:

We’ve had a bit of and update and a shuffle around on the events page which now has more details about the some of the upcoming summer events which will be taking place around the country. Much of it seems to be Northern based so far, so if any of your Southern guys and gals have anything you’d like to add to the calendar then please let us know.

Take a look at the events page for more details.

So the final DF65 winter series race at West Lancs YC took a different turn on Sunday. The top three spots in the series were already decided so those three skippers plus two others decided to enjoy a spot of DF95 racing instead. We guess that this is the largest gathering to date of a DF95 fleet and it was a great day to go racing. 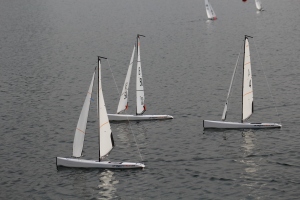 Over the day there were 12 races and 4 skippers won at least one race showing how tight the fleet was. The wind was interestingly light and flukey and during the lunch break it even made a 180 degree switch that made the course change for the afternoon racing pretty simple! 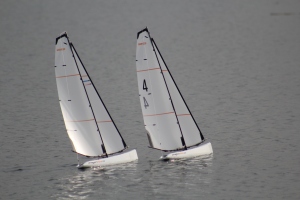 Unsurprisingly John Tushingham showed up with a custom A suit which looked really neat as we have come to expect. Liz Tushingham was sporting one of the NCA demo fleet with stock sails, John Brierley and Tim Lanigan were sporting stock boats and Tim Long turned up with a stock boat apart from the pimped hull stickers. 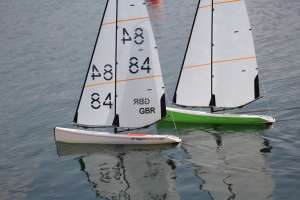 The boats were very evenly matched throughout the day, perhaps JT’s custom sails made the difference or perhaps Liz puts something in his Weetabix at breakfast each morning, we’ll never know but he was clearly the quickest skipper of the day.

JB took a couple of races to get into his stride but once there he was often seen heading the fleet at the finish line despite getting tangled up on a start mark whilst leading a race. 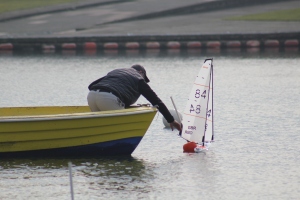 JB recovering his boat after catching a mark

Tim Long set off well then got too excited about the gravity of the day and went off the boil a bit before winning a race, running out of battery and then finishing the last race of the day in second spot to finish the day third overall.

Tim Lanigan was the only skipper not to win a race, however he was sailing a borrowed boat from Derek Priestley which had a few technical issues during the morning session before making better progress in the afternoon. Liz Tushingham won a race and had some solid finishes but in a fleet this tight the numbers soon stack up.

The DF65 racing was enjoyed by six skippers and after the 12 races Mike Parkington took the top spot with Chris Chatfield in second and Sue Parkington in third spot.

The overall West Lancs YC winter series was wrapped up at the last event with JT taking the top spot, JB in second and Tim Long in third spot.

West Lancs YC will be holding the inaugural Dragonfest in May as well as a few other DF events over the course of the sailing season, these dates will be posted on the events page.

Thanks to all those who worked hard to make the series a great success and we look forward to the 2017 winter series which starts on the 8th January.

So we are now in a situation where we have the DF65 and the DF95 which is great news. Lots of you will be like kids at Christmas over the next few days and weeks as your boats arrive.

Here at the association HQ we’ve been pondering how best to deal with the new class from our point of view and we have decided that the simplest way is to incorporate the DF95 class website into the DF65 website. The reason for this is that the concepts are very similar and much of the structure for the two classes is pretty much the same. Also it means that I have one less website to update all the time! 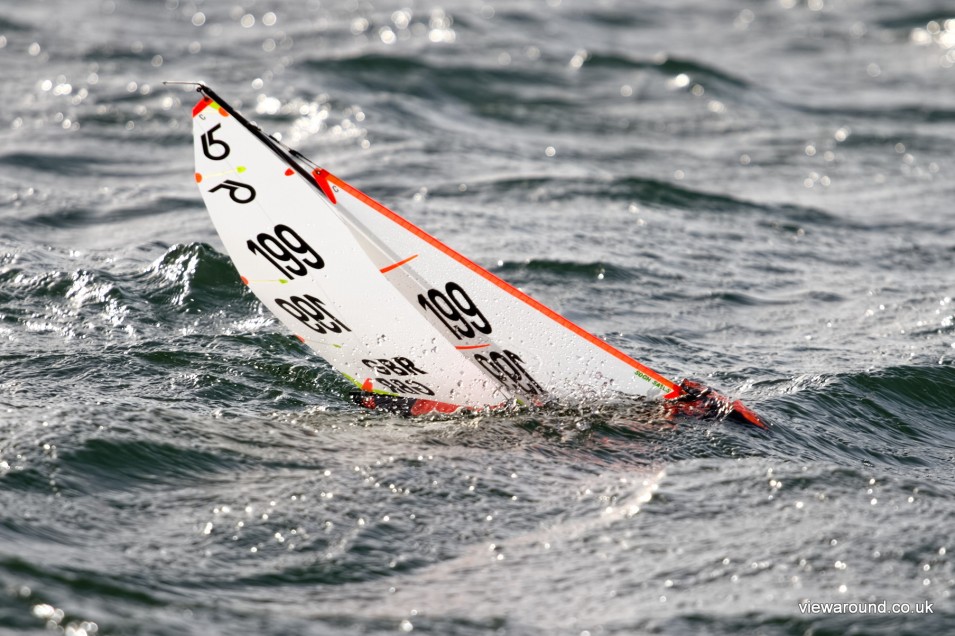 So early next week we will be changing the web address of this site to make it all a bit more cohesive. The site will stay the same but the web address will change to http://www.dfracinguk.com  so please update your bookmarks with the new address.

In the meantime we will be adding some extra content to allow you to register your DF95 and have access to the rules and sail templates.

We hope that this is an easy transition which should be pretty seamless from your point of view.

With a local IOM event attracting one or two of the regulars, 12 skippers turned up for the final round of the series, including John Tushingham. 11 sailed DFs but John Hinde made a change and sailed his JIF 65 which was a good choice in the conditions.

The NNW breeze was quite gentle and A rigs were no problem from the off, but the wind was shifty and reading the shifts was a real test.

JT won the first race, followed by John Bush from Doncaster and Dave Darwell from the home club third after a close race. In the second, Dave D made his intentions clear and took the win with John Hinde sailing an excellent race for second and Tush in third.

John Tush took the third race and this time it was Mick Tonkinson hard on his heels. John Hinde then took race 5, JT race 6 and John Hinde again getting the bullet in race 7. While this was going on, Dave Darwell and Chris More were never far away, Mick T took 3rd in race 5 and Lisa More who has been ever present in the series had an excellent 4th in race 7 beating husband Chris to the line in a very close finish.

John Tush took race 8 chased home by John Hinde and that was time for lunch. As always Joanne and her team at the Lakeside Cafe did us proud.

The wind was forecast to drop a little and it certainly did. After lunch racing was slow and the course shortened but after only 4 races in the afternoon, the wind was so light that there was a danger of the event turning into a ‘Drift Fest’ so Paul Rudkin, OD for the day and suffering from ‘Double Man Flu’, started the calculation process.

In the afternoon, John Tushingham took 3 wins, Dave Darwell had a third, two seconds and a win, Chris More had a second place in race 9 and Jo Sharpe woke up at last and took a third and a second, beating JT to the line by less than a boat length in the final race, just a few lengths behind DD.

In the five race series, the Balne Moor MBC Yachting Section’s first foray into Open races, we had a total of 70 entries, nobody fell in the pond, although Paul Rudkin had an unassailable lead in this category after the fourth event, defying gravity, teetering on the very brink for what seemed like an age, and everyone seems to have enjoyed themselves as well as getting in some good racing to start the year.

On the day, the results were:

What next? The BMMBC DragonForce Open on 17th April and the arrival of the first five DragonFlites into the club later this week.

Thanks to everyone who’s supported the series and we look forward to seeing you back at Askern Lake very soon.

For all you guys and girls in the South East there is an open event at Chipstead MYC on the 12th March, more details on the events page.