So after a few pints and a bit of social on Saturday evening we all went to bed with the promise of some better weather and a bit of breeze on Sunday morning. At midnight it was still raining cats and dogs and I wasn’t sure we’d see anything else.

Sunday morning appeared and as forecast we had bright sunshine and some fine looking breeze to go with it. Back up to the moors and having avoided the most belligerent sheep I’ve ever met there were a good number of skippers at the pond, all ready for action with A rigs set.

Off we go! – Photo Sue Brown

Ken Binks was quick out of the blocks, posting three wins from the first four races with John Tush only managing a couple of second places, a fourth and a fifth in the first four. Nigel Brown, Tim Long and DF95 newbie and DRSC member Dave Kent were a little off the pace but the three of them were to battle for the final podium step for the rest of the day. Further down the field the battles were just as intense and as we know from previous events it doesn’t take too big a mistake to find boats whizzing past you leaving you with a lot of work to do to recover a decent finish.

Race 5 saw Tushy wake up and remember that he was racing and he promptly won the next two, took a third from race 7 and then took the next 5 races. Ken posted a bunch of second places and won the race JT didn’t. Nigel, Tim & Dave continued the titanic struggle to grab the third place with Dave taking two DNF’s which didn’t help his cause. Nigel and Tim traded places during the mid session and third could have gone either way.

Liz Tushingham and Wayne Stobbs were locked in their usual battle and John Smith and Jim LaRoche keeping the battle on its toes. Even the tail end of the fleet were locked in battles of their own throughout the day with DRSC skipper Neil Harvey and well travelled John Howard from Poole being kept honest by DRSC members Nick Whyte and David Brooke.

The downwind leg was a rapid affair! – Photo Sue Brown

Race thirteen was lucky for Tim who scored a win from Ken & Nigel with JT in fourth with normal service being resumed for 14 with JT in top spot from Ken and Nigel with Jim LaRoche from Coalhoue Fort scoring his best result of the day with fourth spot. Ken took 15 from JT, Tim and Nigel.

16 through 20 saw JT seal his win whilst Ken took a discard of a third, yes really he was that consistent all day, Dave scored a second with Tim fourth whilst Nigel had issues and ended eleventh.

The battle for sixth was won by Liz by a reasonable margin from Wayne. Fifth went the way of Dave, who would have done better after a strong finish after another DNF in race 14. The monumental day long battle for third was taken by Nigel by just two points from Tim.

However even Nigel on 65 points was a country mile behind the two class acts of the day, JT and Ken, who scored 22 and 29 and really did show us all how it should be done.

The wind was good all day, top end of A rig all day and perhaps a little beyond at times, the morning races and a couple of afternoon ones were sailed from the South bank before the course was reset and the remaining afternoon races were sailed from the North bank. The race team were very on point all day and worked tirelessly all weekend to ensure that the skippers got the best of the available conditions. Many thanks to the DRSC team, without you guys we wouldn’t be able to enjoy our sport to the same degree, we all hope that you’ll host us again in the future.

Next on the calendar is the DF65 Nationals at Eastbourne in late September.

Sue Brown was, once again, was on hand with her camera on both days and got some great shots of the action which can be viewed by clicking here.

There is also a Dartmoor RSC facebook page which, if you are social media savvy, can be accessed by clicking here.

Having spent the best part of 7.5 hours in the van on Friday making my way to Dartmoor RSC it was a pleasant surprise to be greeted by Ken Binks and Nigel Brown at the lakeside along with several of the DRSC members who had pitched up to ready the water for the DF Racing UK weekend.

Despite the horizontal rain and low cloud myself, Nigel and Ken put boats on the water and had a bit of a tune up before the rain and wind really arrived and we abandoned to a local pub for the evening.

Saturdays forecast was suitably poor, with very little breeze forecast to come from many directions along with bucket loads of rain too.

Twenty two skippers, a good mix of locals and travellers, braved the conditions which, at first, didn’t look too terrible and the two seeding races were held to determine the two fleets in not too much rain and a reasonable bit of breeze. If you had one, an A plus rig was the thing to have today, the first time it has been utilised in competition properly here in the UK and well worth the investment. 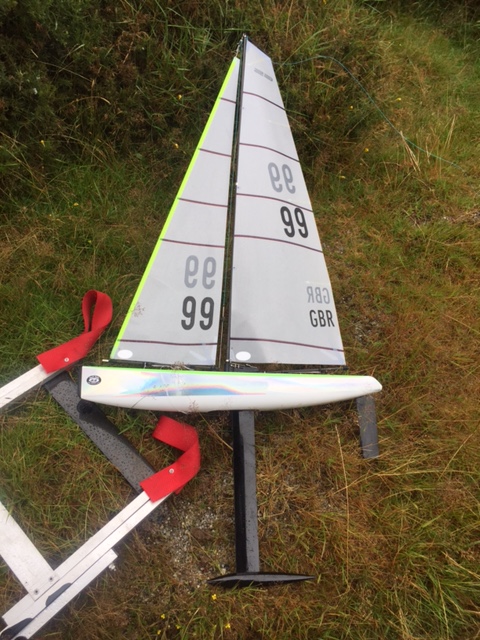 An A plus rig – very handy today!

Nigel Brown won his seeding with Liz Tush winning hers whilst husband John could only manage a third place finish in his seeding.

Nigel went on to win the next two races before another winner, Ken Binks, was to take the top step of the podium. Race 5 saw John Tush take his first win of the day after a slow start and 6, 7 and 8 also went Tushy’s way which we put down to a good lunch.

After a couple of thirds and some discards it seems that a  good lunch had also done the well travelled Tim Long the world of good and he posted some good results, including a win in race 9, during the afternoon session.

With the wind fading and Tushy taking race 10 it was decided that the skippers and race team had had enough and once again the rain had set in.

With ten races completed with the two fleets it was Tushy who took the win from Nigel by 2 points, Tim was 6 points adrift of Nigel in third and Ken was just three behind Tim. There was a reasonable gap back to the next group of Wayne Stobbs, Liz Tush, Dave Kent and James Scrimshaw.

Much good racing was had by all, the race team did a grand job in challenging circumstances and the skippers were very well behaved at this great venue.

Tomorrow sees the DF95 fleet take to the water when we are perhaps promised some wind and even a little sunshine.

Tick tock, the clock is ticking on the Dartmoor RSC DF Racing event which takes place next weekend, 29th & 30th July on the hills above Plymouth. Not quite the uptake we had hoped for, with some of the usual suspects on duty elsewhere that weekend and Buzz Coleman who’s racing with the DF crowd in San Diego.

If you are umming and ahhing as to whether you’ll see some good racing, well I’m sure you will and if you live on the South Coast you have no excuses not to get involved. Any of the DRSC club members that fancy racing, please get involved too, it’ll be a whole heap of fun.

For details of who has already entered and how to enter yourself please click here and take a look.

In other news, entries for the DF65 Nationals in September is hovering around the 30 mark, lots of time to enter this one, go on, you know you want to!!

Evening all, just a quick reminder about the upcoming DF Racing events. We have a double header DF Racing weekend at Dartmoor RSC which is a new venue for us and looks superb, this is detailed in the post below this one and is well worth a look and is a chance for those skippers from the local area to pit their skills against the top UK skippers who are travelling from all over the country. Details are here.

We also have an early reminder about the DF65 Nationals which are happening in September at the Eastbourne club. There is now an online entry list and an online entry form, both available by clicking here

We also have two other weekend events, one in October at Keighley and the final one at Lincoln on bonfire night weekend. Get yourselves along and enjoy some racing, 100 plus people can’t be wrong!