Although it was cold it was dry, much drier than the previous meeting where Noah floated by asking if we needed a lift. For the second of the West Lancs winter series we saw another good entry of 15 boats with several different faces from the first event and we reckoned that if everyone turned up we’d probably have a fleet of nearly 30 boats.  B rigs were the order of the day for the DF fleet. 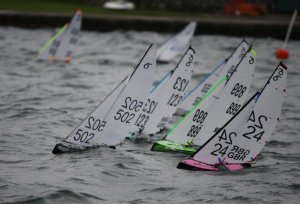 As usual we were sharing the course with the RC laser skippers who numbered 13 and used a separate windward mark slightly further into the brisk South Easterly breeze.  Several skippers missed the briefing and sailed the wrong course in the first race which was an immediate discard for most, the second race was taken by John Brierley who has started to come of age in the Northern Fleet and he also took another bullet during the afternoon session. the rest of the morning races were taken by a Mr Tushingham of Ilkley apart from one which was taken by Tim Long right on the line. Tim should have had a couple more bullets but once in the lead of the race he found it difficult to maintain the form that had put him there, however he did string together a useful set of numbers during the day.

There are always a few incidents during the day with the DF’s chasing the Lasers around the course and often catching them too.  One unlucky skipper Joanne Sharpe seemed to see more damage than most and was dragged to the far side of the lake by a marauding Laser.  The size difference and controllability of the two boats does make for some interesting sailing, but it certainly keeps you on your toes when in close company. 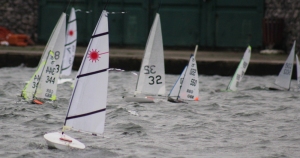 Mixed fleet in a blow

There was a guest skipper, Mr Andy Kissick who hasn’t raced in 18 months and was over from the Channel Islands to visit family, he put on a good show but didn’t quite hit the mark however his results improved as the day went on. Another skipper who struggled last time out was Mike Parkington, who this time round had the measure of his boat and put some solid scores on the board throughout the day to finish fifth behind Tim Lanigan who didn’t count a score over 6th but in this competitive fleet it saw him finish fourth for the day. The top three were Tim Long on 25 points, tied with John Brierley also on 25 points, John took the second spot by virtue of two bullets to Tim’s one. Unsurprisingly John Tushingham took the top spot for the day which now sees him leading the series.

John Tush and Tim Long are away for the next one so the door is open for the top and bottom steps of the podium.